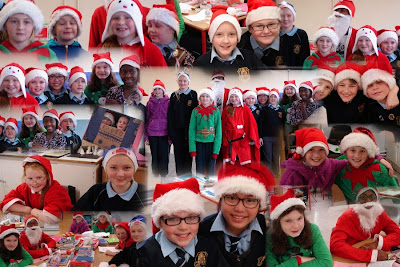 This year my class performed a play called 'What, No Santa Claus? It was about Santa Claus, Mrs.Claus and Santa's elves, Jingle, Dingle, Winky, Blinky, Holly, Jolly, and Mistletoe. Santa Claus gets very sick on Christmas Eve. Santa keeps trying to get up to go to deliver all the presents but Mrs.Claus wouldn’t let him go. It was a very funny play.
In the end Mrs.Claus wouldn’t let Santa go to deliver the presents so she dressed up as Santa and went off herself to deliver the presents. We performed the play on Tuesday 16th December for the other students in the school and on Thursday 18th for our parents. I loved playing the part of Mrs. Claus. I had lots of fun performing in the play.
posted by Rachael

My Christmas play was about Santa being sick. I was Santa and I had to be sick. My friend was Mrs. Claus. It was lots of fun. Playing Santa was so exiting but at the same time it was hard to learn my line as well. Everyone I told about it was supportive. I was not allowed to tell anyone else that I was playing the part of Santa Claus because it was a surprise. I have friends in the other classes so it was hard not to tell them. In the end the play was a great success.
posted by Oke